What are you looking for?

Image by Remedy Pics by Unsplash

Throughout human history, Hemp has been a highly valued crop. It’s uses can vary from paper to textiles, to paper to biofuel!

It’s believed that Hemp is one of the oldest cultivated crops, with current evidence suggesting it began in central Asia.  For centuries, Eastern & Western cultures would use the fibrous plant for everything from paper to ropes, clothing, fishing nets & tents. In the early 1500’s, British farmers were legally obligated to grow hemp as it was an ideal commodity for the canvas & ropes of sailing ships. (1) Believe it or not, little old New Zealand & Australia, were, in part, a colonies established to help provide hemp to the British empire! (2)

Alongside all this industrial use, hemp has also been a part of ancient diets – especially in China (3) – & for good reason!  Seeds contain the full set of nutrients that the plant needs to grow, so when consumed, seeds, naturally, are a “superfood”.

So why is hemp suddenly flooding the market? Well, in the late 1800’s, the smoking of “marijuana” had started to become illegal in many countries. This then came to a head in 1930’s thanks to the head of the then US Federal Bureau of Narcotics, Harry Anslinger, who ran a racist propaganda campaign against “marijuana” – the Mexican world for the cannabis plant – taking a stance that it was a drug that induced rage & violence in subjects (4).  Once the Marijuana Tax Act was passed in 1937, Industrial Hemp was lumped in the group because it was believed that it would be hard to distinguish from its sister strain (5) which contains THC, the psychotropic ingredient which causes a “high”. Aside from a brief lift in the hemp prohibition during WW2, this led to the demise of the cultivation of industrial hemp in the USA.

Just to put this in perspective; hemp has been one of the most widely useful crops throughout human history, & it’s only taken 3 generations (with considerable influence from the USA) to completely muddy it’s uses in industry & food.

We’re excited that, after much consultation, Ministry of Primary Industry have lifted the regulations on the sale of industrial hemp seed as food in New Zealand. Let’s be clear, the industrial hemp we’re talking about contains about 0.3% THC, this is not enough to induce a psychoactive response (6). On the plus side, the industrial hemp we’re talking about ALSO contains high levels of vitamin E, along with minerals such as phosphorus, potassium, sodium, magnesium, sulphur, calcium, iron, & zinc (7). They also add a complimentary nutty flavour to food dishes.

Aside from their great taste here are the things that excite me about consuming hemp seeds;

Hulled hemp seeds are around 33% protein (7). The big deal here is that hemp seeds contain all 9 essential amino acids (EAA), making them a complete protein

Another cool benefit in the amino acid camp is that hemp also has high levels of arginine, which is a, bear with me, conditionally essential amino acid. This means that, while our bodies do make it, higher can be beneficial when we’re under stress (sick, wounded etc). This is because arginine helps our bodies heal wounds, remove waste & balance hormones (8). Arginine is also associated with reducing the long-term risk of cardiovascular disease (9).

Geek Piece
Just so you know, amino acids are the molecules that can form together to create proteins. Humans require about 20 amino acids to create the proteins that we need function. Some of these amino acids are produced by our bodies, some are not. The 9 amino acids that are not, need to be consumed in our diets (10). Hence why they are termed essential. So, the fact that all 9 of these EAA are found in hemp is great news, especially to those currently on plant-based diets.

Hemp Seeds are loaded with essential fatty acids, again, these are essential because our bodies don’t produce them & they must be obtained through our diets (11).

What really sets hemp apart from other plant based EFA sources, is its omega 6 to omega 3 ratio. Hemp seeds have an ideal ratio of 2-3:1 (n-6:n-3), which is the dietary balance we have evolved on (12).

While some people require higher fat intakes than others, fats are an important nutrient for us to consume. In 2 generations fats have been branded as the cause of so much disease, yet, the unfounded reduction in fats from our general diets has been coupled with a global increase in negative health markers; obesity, diabetes & cardiovascular diseases. My simple advice; don’t fear the fat, question the source.

Geek Piece
Our ancestors evolved on diets with an EFA ratio 1:1. The optimal range for this ratio is up to 4:1 (13), yet we are generally consuming a diet with a ratio of up to 50:1 in some cases! The reasoning here is that excess n-6 intake induces an inflammatory response, where as n-3 produces an anti-inflammatory response (14)(15). Diets with a high n-6:n-3 ratio are also associated with weight gain (16).

Fibre is a very important factor in a healthy diet. In nature, fibre is found with sugars & visa versa. When we consume plant matter, we are consuming fibre. Fibre ensures we don’t overload on sugars from too much fruit in two ways; For starters, it helps keep chum in our stomach (great word; it’s the term used to describe the mushy lump of food post-mastication!), slowing down its journey into our intestines. Secondly, it slows down the absorption of sugars from food as it travels through our intestines (ah, the wonderful journey of nutrient transfer) . Diets with a high n-6:n-3 ratio are also associated with weight gain (17). This “bulking” action also helps keep things moving on the regular down there…If you know what I mean 😉

We always use wholefood ingredients in our Snackaballs because we want to keep the fibre up! Hemp seeds play an important role here by adding to the total fibre in each Snackaball.

Geek Piece
Current RDI’s for fibre for men & women respectively are 30g & 25g per day (18), while our ancestors were probably consuming about 100g per day of nature’s broom (19). Fibre is SUPER AWESOME because it plays a role in preventing bowel disorders & heart disease, as well as feed the microbiome in our guts because… FIBRE IS “PREBIOTIC”

While Hemp is part of the cannabis family, it is very different to marijuana (20). Marijuana contains very high levels of THC – the psycho active compound that effects the brain & gets users “high”. Hemp, however, contains almost non-detectable levels (1% or less) (21) & is considered safe for regular consumption for people of all ages – young & old! 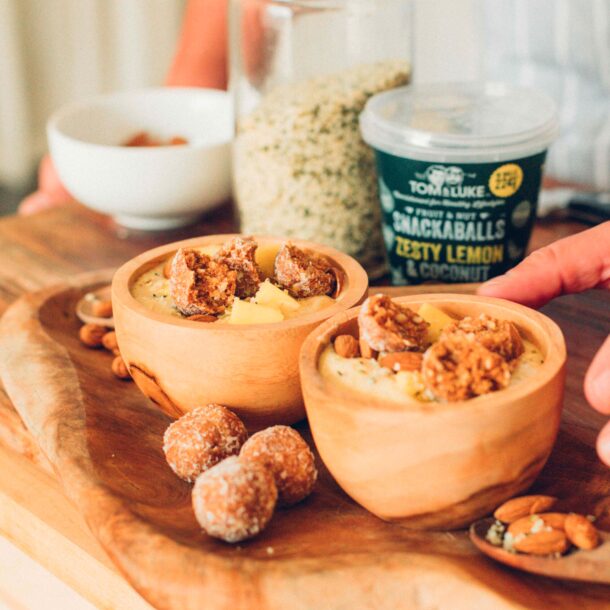 STAY UP TO DATE WITH US

You have Successfully Subscribed!